Special Olympics® Unified Robotics™ is an inclusive robotics program open to students with a variety of learning levels, bringing the world of STEM and robotics to high school students with special needs during a 6-week program.

Special Olympics Unified Robotics™ exposes engineering, programming and robotics to students with learning disabilities and behavioral challenges and fosters a neurodiverse work environment promoting social inclusion. Students from the general education population, often from a robotics team, work alongside students with intellectual disabilities and/or autism in one-to-one partnerships to build robots in small teams ranging from two (2) to six (6) students using kits made by LEGO®. Each team designs, builds, and programs their own robot during a six 6 week period*. At the Regional Championship, each team presents their robot and its features to judges, then competes in a tournament-style competition.

The purpose of this guidebook is to provide the tools to start a team and participate with other schools with the same mission, rules, and involvement. This guidebook will update frequently, so please check back on for the most up-to-date version.

*A Unified Robotics season may vary in length and start time. Factors that affect the season timeline include interrupting holidays and conflicting season timelines of FIRST® programs.

“Partners” involved in a FIRST® team, or in the general education population, work alongside “athletes,” students from the special education population. A Unified Robotics coach, who may be a FIRST® team coach, special education teacher, parent, or other supervising adult attends the club meetings; however, the program is developed to be 100% student-led.  Therefore, the adult advisor does not need to have a background in robotics.  The school’s special education teachers play a crucial role in generating awareness and encouraging students to join. If your school already has a Unified Sports® program through Special Olympics, the Unified Sports liaison will also assist you.

It is advised to notify necessary school staff regarding this program, including, but not limited to, the special education coordinator/teacher, school principal, school ASB club, and yearbook staff (if you are planning to add the club to your school’s yearbook).

Since the Unified Robotics season starts in September, we recommend that the staff is notified during the springtime for planning, and to publicize that your school is participating in a Special Olympics Unified Robotics™ Club in course overview packets. Generally, the steps to create a club are the following:

Check your school’s club policies for a more accurate process.

Teams of two (2) to six (6) students will be working together with LEGO® MINDSTORMS® EV3 Education Core Kits throughout the season. Although any version of MINDSTORMS NXT Kits are acceptable, we recommend using EV3 kits because the LEGO Group is providing support for newer models. Each team requires the use of one (1) Core Kit, each costing around $379.95. The total quantity of Core Kits varies depending on the number of teams in the club. It is optional for the club to purchase one (1) MINDSTORMS EV3 Expansion Kits per 3 teams, for extra and additional parts. Each Expansion Kit costs $99.95.

You are able to purchase Core Kits and purchase Expansion Kits at the LEGO Education website.

It is recommended that the space has one (1) table per team to have enough to accommodate a computer, their MINDSTORMS Kit, and their robot. It is ideal to be in a quiet and distraction-free environment.

The pacing of the build time depends on the individual students.  Partners should not rush the athlete, or take over the building process.  Meetings generally are 60-90 minutes once a week, depending on the schedule, pacing, and consensus of team leaders.

Student leads should work with the special education teacher in their school to organize teams in advance based on students’ individual skills. There should be a ratio of one (1) partner per two (2) athletes. Teams should not exceed a combined total of six (6) students. Partnerships should be based on student pacing—students with vastly different pacing may affect the interest and enthusiasm of the team. Students should be of similar ages.

Each team meeting typically lasts 60-90 minutes, however, meeting times and days may vary, depending on student and coach availability.

Note: If you start a Unified Robotics™ team within a few weeks after the official kickoff, you are still able to participate and compete in the season’s championship tournament as long as the team has registered before the cutoff, met a minimum of four (4) building days and has a complete robot.

The kickoff meeting is a social and introductory meeting where everyone in the club gets to know each other and is informed of the logistics of meetings and the timeline of the season.

The introduction to the club should include the following:

After the kickoff meeting, teammates will work together to build and program a MINDSTORMS® robot, either through the provided instruction manual in their kit or through a design the team develops. This part of the season can last four (4) to six (6) weeks depending on club size and schedule. After their robot has been built, teams will program their robot with software provided by the LEGO® Group, and will continuously test and refine their designs and program to develop a well-tested and structurally sound robot.

During the last two (2) weeks of Robot Build Meetings, students will also practice presenting their robot, which includes the following:

During this time, teams test and refine their robot on a game field.

The last week of the Season includes the tournament. As schools within a region form teams, they will compete in an interschool competition. Until such a time, each school is encouraged to hold a tournament in your school during which the teams from that school can showcase their robots and compete against each other, perhaps during a school assembly or other special gathering of the student body.

The Championship Tournament begins with an Opening Ceremony, highlighting the participants and supporters of the program. Teams may give their presentations to the audience with the points described above. All teams will be competing in a Double-Elimination Tournament with the Game established in the beginning of the Season. During this time, Judges will determine teams who receive awards based on their conversations with each team and the criteria required to qualify. Officials are provided for each competition.

Teams compete together in a friendlier version of ‘Sumo Robots.’ Two (2) teams, against each other, compete in a four (4) foot by four (4) foot field with a 4.5-inch-thick black circle, thirty-five (35) inches inside-to-inside diameter. The objective of this game is to push the opponent’s robot outside of the black circle, in order for that robot to be called “out.” The robot that stays within the ring the longest wins.

For onsite school competitions, you can make, procure, or purchase ribbons and awards, as well as Certificates for Judged Awards, including the Award Title and the Description of the Award. FIRST RGV will provide trophies for the Regional Championship.

Final match of day 01 - we are one closer to launching a ring. Our chain and motor for the intake has been a bit of a struggle but it’s getting better. We expect to launch rings tomorrow!! ⭕️
#TXCUP21 hcisd #hcisdrobotics

We had MAJOR gains in our third match!! Our wobbler made it to Box A with our Autonomous code!! We were able to do this before regionals but had errors in our code than needed fixing so we had trouble with this at regionals. 👏
#TXCUP21 hcisd #hcisdrobotics

So the ring got stuck under our green launcher so back to the pit to make some minor adjustments! Getting ready for our second match of Day 01!
#TXCUP21 hcisd #hcisdrobotics

Our first_official_ Robotics Team 14679Valkyrie has advanced to the state level! Today, we sent them off to the Alamodome in San Antonio where they will compete against teams from across Texas. We are extremely proud of them and the hard work they poured into this season. Way to go Team Valkyrie! hcisd #hcisdrobotics #ftcrobotics #ValkyrieFTC #ftc14679 #stem2prep #firstrgv #firstinspires #FIRSTlikeagirl #girlsinstem #stemspiration #engineering firstrgv #firstintexas ftcbot ...

It’s all coming together!! We leave to state tomorrow morning!

From our presentation on Friday
Good luck to all the teams at the Texas Cup!!!
#first #firstrgv #ftc ...

We just wrapped up the interview for firstintexas FTC #firstTXCup! Good luck to all of the teams interviewing!

Adding a rooftop on our new design so the hubs are both out of the way and easily accessible.

Picking up rings has been a challenge for us all year. Today, we are one step closer. ⭕️

Congratulations to the seniors and thanks for showing your robotics pride. Share your pictures with us. #FIRSTRGV ... 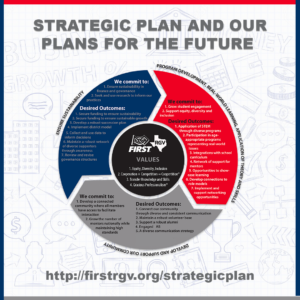 “I am not going to lie, the first day I thought I was in the wrong class because I was the only girl. I was like terrified, Cortez said. “But, I said, okay, I will stick with this.” Cortez is pleased she did because that first class focusing on science, technology, engineering and math, led to her involvement with FIRST RGV, a nonprofit that organizes FIRST robotics competitions for school aged participants. The post Interview with Maria – Dean’s List Winner appeared first on . [...]

In 2020, the Rio Grande Valley has finally earned its first Dean's List Winner with FIRST robotics. Congratulations to the winner and their coaches, administrators, team members and families. The post We Have a Dean’s List Winner appeared first on . [...]

Case for using FIRST in the classroom

FIRST® has many stories of how it has inspired its members in STEM. Recently I attended the FIRST® World Championships in Detroit and met many of these kids. Their passion and enthusiasm were contagious. Dean Kamen’s famous saying “I don’t use kids to build robots. I use robots to build kids.-” was evident at the event. The post Case for using FIRST in the classroom appeared first on . [...]

Enable Notifications    OK No thanks